In many ways, the longsword is very similar to the arming sword. It's a little longer, and a little heavier, but it actually performs rather differently.

Your basic longsword is about 4 feet long and about 3 lbs in weight. Longswords are built either for unarmoured or armoured combat, or built to make a compromise between the two.

Longswords built for armoured combat have a stiff blade, aggressively pointed. This is to facilitate the powerful thrusts required to defeat armour. The last few inches will be very sharp. Designs differ, but there will often be some provision for grasping the blade with your off-hand (this is known as "half-swording") - either the whole blade will be sharp save for a hand-sized portion in the middle of the last third, or only the tip will be sharp. Some longswords designed for armoured combat will have the quillons sharpened to points, to allow devastating quillon punches and mortschlags (more on that later).

Longswords built for unarmoured combat will have a more flexible blade, sharp all the way down. It may not be quite as aggressively pointed.

I'd like to clarify that the "unsharpened" portions are not totally dull, they're just not nearly as sharp as the rest of the sword.

The longsword, despite being a weapon of status, was not typically the primary battlefield weapon of armoured men, who typically preferred spears or poleaxes. The longsword was primarily a sidearm or a self-defence weapon.

Much like the arming sword, the cuts are delivered by pushing the balance point forward not with big swinging arm movements - . The big difference with a two-handed sword is that you do a "lever" action with your two hands, moving your right hand forward and your left hand back to snap the tip forward faster and more powerfully.

Half-swording basically turns your sword into a small spear, and many of the spear plays are possible with the half-sword. It provides a powerful defence that can easily transition into a powerful thrust, and because it gets you in close, it puts you in a great position to enter and get into grappling.

Both Fiore and Vadi say, "the sword is an axe". While this statement is rather cryptic alone, by looking to the German tradition, we see a technique called the "mortschlag", or "murder-blow".


The mortschlag involves grasping the blade with both hands, and swinging the sword exactly like an axe or mace. Ringeck advises that mortschlags be delivered to the foot, the hand or arm, or to the back of the hip or shoulder. Tallhoffer (I think - I know some of my readers are better versed in the German tradition than I am, and will surely correct me) describes used the crossguard to hook and disarm from  mortschlag.

The other side of the comment "the sword is an axe" is, in my opinion, that the sword and the axe share, amongst the knightly weapons, that is equally capable of thrusts and blows. 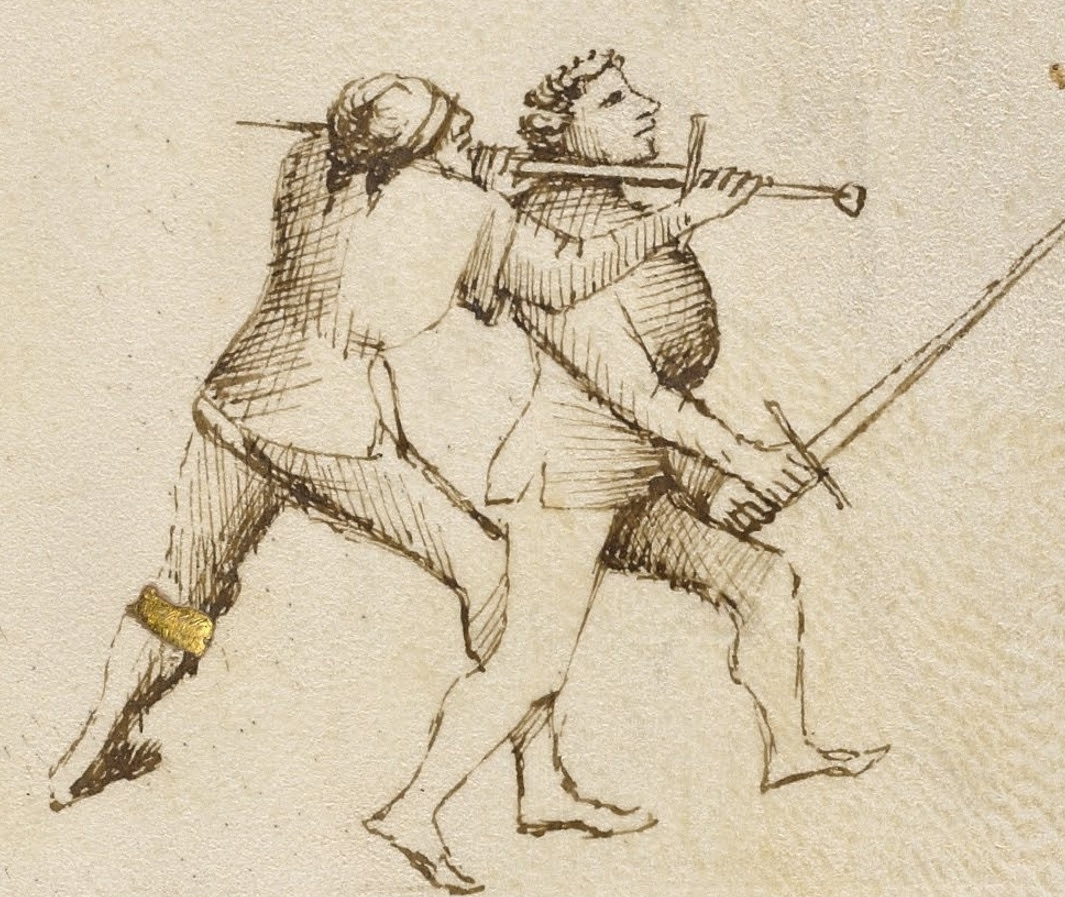 In defence the longsword is used much like arming sword except at the half-sword, so that's what I'll discuss here.

Much like the spear, the half-sword can be used to knock a blow or thrust aside and immediately counter with a thrust of your own, or blow right through into a pommel/quillon strike.


Once you've blocked or parried at the half-sword, you're going to be very close to your opponent, and many defences in armour revolve around grappling. A man in armour is extremely well-protected, and throwing him to the ground is a great way to neutralize that advantage. Working at the half-sword facilitates this.