I mentioned Naismith's Rule in my last post, as it's relevant to overland movement. If you don't know about the Naismith Rule, it's a rule of thumb to guesstimate the minimum time for a given hike. The rule is:

Now, this is for a fit, unencumbered adult in ideal conditions (good terrain, daytime), and it doesn't take into account bathroom breaks, lunch, etc. If you're loaded down, walking through sand, traveling at night, or a halfling, it's going to take longer. But this is a good starting point. You can also plug in different values for the assumed walking speed (which is 3mph by default) to adjust for movement rate differences in your system.

6-8 hours of actual travel in a day is about what is sustainable (according to the US Army).

At the same time, I've come across this chart, at Combat Reform. It has much, much higher speeds.

Now, if I'm interpreting this correctly, this is not intended to be march speeds for sustained marching. This would be for an approach march from an airborne drop into a combat zone. Even taking into account the fact that soldiers are among the strongest, fittest people around, I don't think this is realistic over long distances. My opinion is backed up by the US Army's documents on foot marches.

The US Army's official chart for cross-country foot marching agrees that this is much too fast (from FM 21-18): 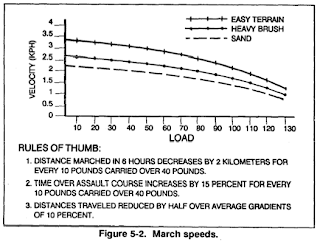 The US Army figures about 2mph average for an unencumbered soldier cross-country in good terrain. Assuming an equivalence with Naismith's Rule, we can see that the US Army allows for about 220 yards of ascent in an average cross-country march hour, or for loading of the soldier, or some combination. 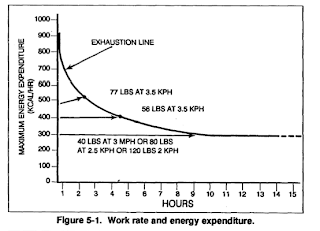 This is then backed up by their exhaustion chart (I'm pretty sure MPH is a typo, and should read KPH, as they don't use miles anywhere else in the document). You can see that they figure 9 hours to exaustion at the stated speeds. The manual states the typical travel day is 6-8 hours, which is what you'd expect if you want your soldiers to arrive ready to fight. 6 hours is 8 hours on the trail with a good amount of time for breaks.

They also talk about forced marches in FM 21-18. They say that moving faster isn't really practical, but that you can move further in a day by just marching longer. Roughly speaking, the guidelines for forced marches say that you can do about 50% more miles per day for about three days. This will tucker you out, though.

I think I'd follow from the US Army considerations, but simplify things a little into a few categories. If you're exceptionally fit, move up one category. If you're not very fit, move down one. (i.e. if you have a Constitution bonus or penalty.)

Drop one category for night movement.